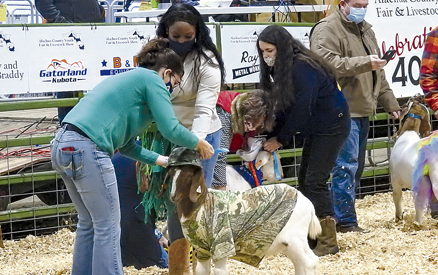 NEWBERRY ‒ Despite restrictions on events and crowds due to the COVID-19 pandemic, the 40th annual Alachua County Youth Fair and Livestock Show (ACYFLS) is back for another year. This year marked the first time the event was held in Newberry at the former Canterbury Equestrian Showplace. The new site was purchased by Alachua County in 2019 for nearly $4 million. More than $8 million went into upgrading the facilities, and it was renamed the Alachua County Agriculture and Equestrian Center. The location will also be home to the Alachua County Fairgrounds, hosting events like the Livestock Youth Fair, which is the first major event held at the site.

According to former Alachua County Commissioner Lee Pinkoson, Alachua County had been searching for a new location for the fairgrounds and a new UF IFAS extension center for almost 40 years. “They kept it together with baling wire, duct tape and chewing gum, but their perseverance was ultimately rewarded, and here we are today,” Pinkoson said.

Since the initial ribbon cutting in October 2020, the following months were spent replacing and updating the site including the arena, buildings, railings, concrete, and restrooms as well bringing it up to current safety standards. The new facility has a 150-ft. X 250-ft. open-air pavilion with seating for more than 2,000. In addition to hosting the Youth Fair and equestrian events, the arena can host other events including festivals, rodeos, auctions, concerts and trade shows. The facility also has plenty of space for spectators to social distance in the stands.

On Friday, March 5, the new site came to life with the opening of the Alachua County Youth Fair & Livestock Show. The event is sponsored by UF IFAS and the ACYFL Association. The fair brings out hundreds of students who participate in 4-H and FFA in schools throughout the county to exhibit their pigs, goats, chickens and cattle they have raised.

On Saturday, elected officials from the surrounding area including the cities of Newberry, Alachua, High Springs and Gainesville, as well as U.S. Congresswoman Kat Cammack, and IFAS representatives gathered for a dedication ceremony and ribbon cutting.

But before the ribbon was cut, these leaders teamed up with students for a farm animal “celebrity show.” Each pair dressed up a goat in comical clothing and competed to have their animal stand out against the others. After they were all dressed each one circled the rings for the spectators to see and cheer.

UF/IFAS Extension Director Cynthia Sanders thanked the City of Newberry for purchasing the property on which the UF/IFAS buildings sits. Sanders reminded the crowd that even if the kids participating in the youth fair don't become farmers, they will use the skills they learn at the facility in future accomplishments. “These projects they’ve been working on since school started back in August and September as well as the time it takes to raise the animals” added Sanders. “It’s really about the kids and exhibitors developing their life skills, responsibilities and citizenship skills that they’ll carry on for the rest of their life,” Sanders said.