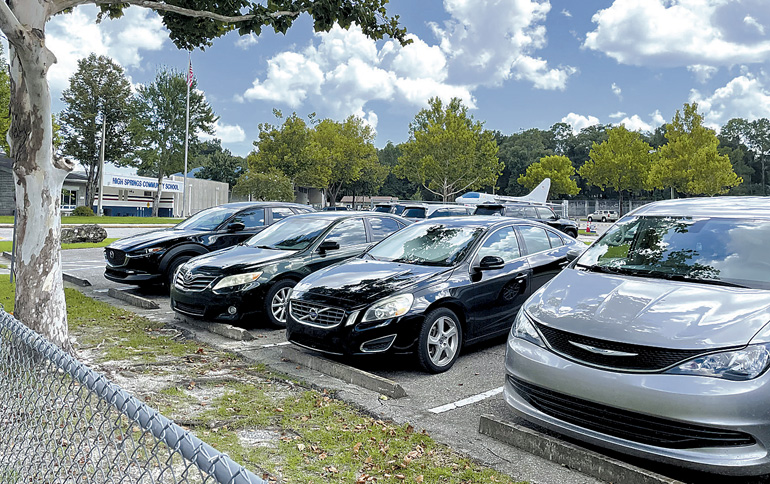 HIGH SPRINGS ‒ Like much of Florida, Alachua County has seen its share of growth in the past 20 years, especially in the smaller outlying communities in the western portion of the county. As more people move into the area, housing growth escalates and new business open to serve the increasing population. While governments at the county and local levels plan and oftentimes struggle to keep up with burgeoning demand, school systems also are not immune to the impacts of increasing populations.

According to High Springs City Commissioner Ross Ambrose, the City Commission is concerned about the municipality’s ability to keep up with infrastructure needed for the anticipated increase, especially regarding school facilities. Local governments use concurrency plans through a system of land use regulations that ensure public services such as roads, utilities, water and sewage, parks, libraries and schools will be adequate to meet the demands of new development. In some cases, developers may have received approval for projects in the future that did not anticipate other growth or development.

High Springs has attempted to maintain its small-town appeal and natural recreation areas and limit urban sprawl and development, but the City is restricted by development deals passed up to 20 years ago based on prior concurrency requirements. This small-town identity that High Springs seeks to maintain is in part responsible for the growth and it is anticipated that the population will exceed 10,000 within five years.

School concurrency was mandated by the Florida Legislature in 2005 and initially implemented in Alachua County in 2008. Alachua County Public Schools has 48 schools including 31 elementary schools, nine middle schools and eight high Schools, along with two special education centers, an early childhood center, a family services center and an environmental education center. The majority of these are located in Gainesville, with a population of 133,997 as of 2019. The School Board of Alachua County (SBAC) set its focus and resources on where the anticipated growth would take place. But the rural smaller towns have actually seen the largest growth, especially among children under 18 years of age.

High Springs, with a population of 6,178, has only one combined elementary and middle school, which is already at over 100 percent capacity, with high schoolers attending Santa Fe High School in Alachua, which is currently at almost 96 percent capacity and just saw its largest increase in incoming freshman students.

State law mandates that each local school board is responsible for maintaining, repairing and building schools to meet the demand and concurrency plans. The SBAC has seen funding from the State cut over the past 10 years and Alachua County schools have lost over $168 million in funding. The average school building is over 40 years old and three of the four schools in Alachua were built over 60 years ago. The drastic loss of state dollars has left the school board searching for alternate funding.

In 2018, Alachua County Public Schools sought and received voter approval for a one-half cent sales tax surcharge to fund school construction, renovation and modernization. To support this initiative, the 2019-2030 Strategic Plan was developed to return schools to their existing permanent / new permanent capacity and eliminate portables. The money would be used for projects at each of the schools to modernize classrooms, build new facilities, improve media centers, modernize kitchens and build new infrastructure. Since 14 of the elementary schools in the county are over capacity, with the outlying western communities especially hard hit, the SBAC decided several years ago to consolidate and rezone the districts from nine zones to four, which would spread out the student population and revise the numbers so that fewer schools are at capacity.

According to Ambrose, this allowed the SBAC to not be required to build new facilities in outlying districts since they were no longer at capacity. This put more responsibility on the communities or developers to fund new schools and provide available land. After the sales tax was approved, most of the funding was directed at Gainesville schools, including building Terwilliger, a new elementary school, which cost over $4 million of the estimated $22 million a year the school board receives from the tax. They also made major reconstruction, renovations or new facilities at nine Gainesville schools.

“None of the funding has been earmarked for renovations at our single overcrowded High Springs elementary/middle school. If there is funding left at the end of their other projects, we are on the list for a new HVAC in the school, but that is based on leftover funding,” Ambrose said. “We have had several local developers offer to provide land for a new school, but the source of funding has not been clarified and the SBAC says they don't have the funds for that.”

Ambrose went on to say that the School Board wants to consider other options such as busing to the schools in Alachua or Newberry. And he has concerns about the issues that plan would create, citing longer days for families and students, road capacity with additional buses running, and the transportation costs. “It would temporarily spread out the numbers but would also put those remaining schools closer to capacity and not take into consideration additional growth,” said Ambrose.

Alachua County Public Schools spokesperson Jackie Johnson says the school board is reconsidering where some of the funding goes and that Superintendent Carlee Simon has met with some of the city governments and wants input to revisit and revise some of the upcoming budget. “Dr. Carlee Simon is aware of the situation in the western rural communities and their projected growth,” said Johnson. “This has been a difficult time for funding, especially with the added cost of the pandemic, but she wants to make sure we disperse the funds from the school tax in a fair manner to all the communities in the county.”

“If they won't consider building a new school in this area to at least split the elementary and middle schools, they could at least put some of the sales tax money into the schools in the rural west of the county to provide more space and improve the facilities and technology,” Ambrose said. “Right now, we feel that there is no support in maintaining a good local education environment in our community.”