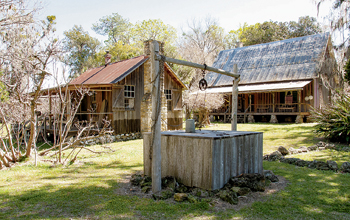 NEWBERRY ‒ Although Dudley Farm Historic State Park is usually identified as being in Newberry by most area residents, it wasn’t. Now it is. On Sept. 27, the Newberry City Commission formally annexed the park into the city of Newberry.

The property, which is located at 18730 W. Newberry Road, has a Newberry mailing address. However, only a small portion of the park lands actually were officially in the city’s limits. Included in the 13 tax parcels officially annexed into the City were five parcels owned by the State of Florida consisting of approximately 256.253 acres. These parcels, which are located approximately one-half mile east of Northwest 202nd Street on the north side of West Newberry Road, include Dudley Farms.

With the realization that the annexation of this historic site had finally been accomplished, Commissioners and audience members clapped in approval. Mayor Jordan Marlowe said the City had been working toward this outcome for some time and was delighted the City had achieved that goal.

All totaled, the City finalized the annexation of more than 600 acres of property to “strengthen contiguity and improve overall compactness of the municipal boundary in the various areas,” said Newberry Planner Wendy Kinser-Maxwell.

In other City business, the Commission narrowly approved the establishment of a water public service tax in a 3-2 vote, which will cost residents $1.48 per month. The funds are designed to produce revenue to be used for construction of roads in the downtown Newberry area. Commissioners Tim Marden and Monty Farnsworth voted “no” on this item.

Also approved was Ordinance 2021-45, authorizing the creation of a trust fund where revenues for the Newberry Community Redevelopment Agency (CRA) district will be deposited.

This step moves the City closer to administering a CRA for Newberry, something that has taken the City and Alachua County several years to accomplish.

Also receiving approval was the final plat of Country Way Phase 4, which is expected to include 64 lots, re-plat approval of two lots owned by Pat Post to change their orientation from facing north onto Southwest 3rd Avenue to facing east onto Southwest 251st Street and a request by Celebrations Catering to allow the sale and consumption of beer, wine and hard seltzer during a one-day outdoor event at the Easton-Newberry Sports Complex.

Commissioners appointed Donald Long to serve the remainder of Bill Conrad’s term on the Planning and Zoning Board. His term will expire on April 30, 2022.

Several other financial items, which were heard initially at the Sept. 13 Commission meeting, were finalized. Commissioners adopted a final millage rate of 5.9999 mills, “which has remained at that millage rate for five years in a row,” said Assistant City Manager Dallas Lee. A final budget amount of $32,815,483 was established for fiscal year 2021-22.

Additional public hearings were conducted to set rates for electric, water, wastewater and solid waste during this meeting. During his presentation Lee presented a graphic of area water rates and commented, “Newberry has the lowest residential rates in the area.”

Commissioner Monty Farnsworth suggested the Commission look at this issue prior to setting next year’s rates. Mayor Marlowe said that wastewater requirements from the government are increasing by 500 percent and the City has to pay for those additional costs.

Marlowe suggested she address this issue during budget workshops for the next fiscal year’s budget. He also suggested she could reduce those costs at her home by having the City install an irrigation meter on her property to offset the amount of water going into the wastewater system. Following discussion Commissioners approved the wastewater rates.