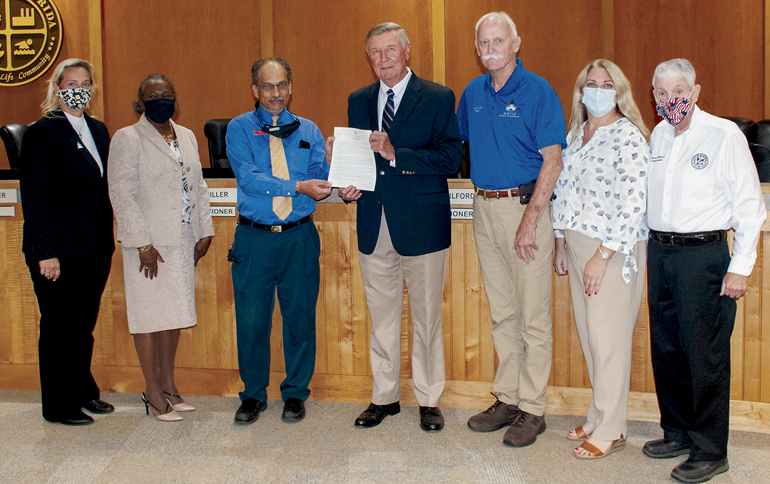 ALACHUA ‒ The City of Alachua may soon be adding Cottage Neighborhood to its Land Development Regulations (LDRs). At the Sept. 27 Alachua City Commission meeting, Ryan Thompson of Causseaux, Hewett, & Walpole, Inc., proposed amendments to the City’s LDRs that would establish a new housing type, known as a Cottage Neighborhood, in the Corporate Park (CP) zoning district.

The Cottage neighborhood is a concept that incorporates housing and work locations in the same community as well as restaurants, retail and recreation in a planned community. Cottage homes located within cottage neighborhoods offer a potentially lower cost single-family detached housing than in traditional subdivisions and residents have the ability to reduce travel to work or use of vehicles, since all facilities would be within walking or biking distance.

Several factors distinguish cottage homes from other housing communities and include smaller lot size or no lots at all; the application of setbacks; building orientation and configuration; vehicle and pedestrian access with shops, work space and housing. Most cottage homes would be clustered around common greens area. This distinguishes the cottage homes concept by providing open space that is located adjacent to and in front of residential dwellings, rather than a more traditional development pattern where dwellings are located along a road. In addition, utility infrastructure and stormwater management facilities required to serve the development is less than required for traditional development.

The proposed amendments would permit cottage neighborhoods exclusively within the Corporate Park (CP) zoning district. Residential uses are only permitted within the CP zoning district if the lands zoned CP are comprised of at least 50 acres of contiguous land.

According the Thompson, the goal of the Cottage homes concept is to “accommodate a range of research and development, technology and life sciences/biotechnology industries, office, supporting retail, and complementary residential uses.” Two project areas that are currently being considered for the Cottage Neighborhood concept are San Felasco Tech City and University of Florida Foundation property located east of County Road 241.

The Commission has appointed two residents to vacant positions on the Senior Resources Advisory Board (SRAB). John E. Brown will serve a three-year term and Vida May Waters will serve a two-year term. The five-member board meets quarterly and serves in an advisory role to the City Commission by providing information on issues of importance to senior citizens in the community.

The City of Alachua has proclaimed October as American Pharmacists Month. In honor of pharmacists’ service to the community, Mayor Gib Coerper read a proclamation and then presented it to Alachua pharmacist William Garst, Pharm.D. The proclamation was in recognition of pharmacists as important members of a health care team with knowledge of medications, the effects they produce in a body, and how they interact or interfere with each other. In addition to safely providing medicine, pharmacists offer many other services as part of their commitment to helping patients live healthier lives. Pharmacists have also played an important role in the fight against COVID-19 by offering testing and vaccines at many locations. Currently there are over 300,000 licensed pharmacists throughout the country.

In a related health matter, the Newberry Opioid Task Force, appointed by the Newberry City Commission, provided information and requested support for their efforts in reducing the number of students who become drug users. Opioid addiction is a long-lasting chronic disease that can cause major health, social, and economic problems. Misuse of prescription opioids and heroin affects more than two million Americans and an estimated 15 million people worldwide each year. The prevalence of opioid misuse and addiction is rapidly increasing. Members of the task force are speaking at commission meetings throughout the county to garner support and funding.

The organization also plan to partner with radKIDS to implement a strategy and a plan to prevent addiction before it occurs. Since 2001, radKIDS has become the national leader in children’s safety education. The task force is requesting $10,000 in funding from the City of Alachua.