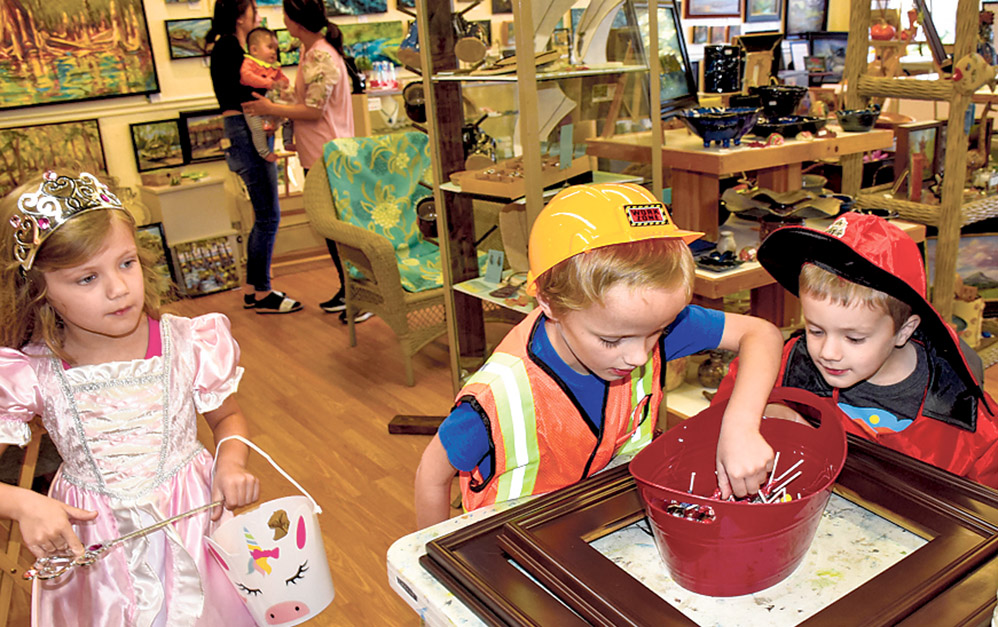 HIGH SPRINGS ‒ It was a day of fun celebrating the autumn season as High Springs held its First Annual Fall Festival on Saturday, Oct. 22 under a clear sunny sky and mild fall weather. Several local organizations combined their efforts and events to produce a city-wide collection of activities celebrating the fall and Halloween.

The High Springs Museum also sponsored a BBQ contest, gave tours of the museum, displayed a model train exhibition for the kids and later hosted a ghost tour around town. The ghost tour started at the Museum, which is allegedly haunted by a former teacher when the building was the town school, and ended at the Grady House, another place in town with a reputation for being haunted. The model train exhibition featured several train collectors who set up displays with running trains inside the museum.

The BBQ contest attracted a number of competitors for prizes and bragging rights in categories for pork, chicken and ribs, as well as an over-all winners award for “Pit Boss.” Winners in each category were: Pork and Chicken - Jeannee Que; Ribs and Salads - Good BBQ; and the “Pit Boss” winners were Jeannee Que and Gary Blevins. Cash prices were awarded for 1st to 3rd place in each category with $100 for 3rd place, $150 for 2nd place and $200 for 1st place. The Pit Boss winner received $300.

The High Springs New Century Women's Club sold sandwiches, hot dogs and baked goods to provide funding to a local day care center and an environmental organization with a focus on river cleanups and other environmental issues.

In the downtown district, 15 businesses offered candy to young trick or treaters who came by in costume. The Kiwanis Club held their annual pumpkin decorating contest held at the Farmers Market off Main Street. Local residents brought in 36 pumpkins they had decorated, many by children involved in art classes at the Good News Art Gallery. To keep the competition fair, there were three age groups consisting of up to 6 years old, 7-12 years and 13 to adult. There were also two groups for organizations or businesses.

Josephine Web won 1st place in the up to 6 category. Elise Knutson won the 7-12 category as well as a $50 prize from the High Springs CRA for the best representation of High Springs with her carved out pumpkin filled with blue jello and miniature figure representing Poe Springs. Local artist Larry Behnke took first place in the 13 and up category with his “Purple People Eater” pumpkin.

Prizes were given for 1st to 3rd place winners in each category. For the younger children, they received a Halloween basket full of candy, prizes and ice cream certificates from Fla Creamery. The older children's group received Halloween baskets with candy, crayons, prizes, coupons from Hardees and free Ice Cream from Florida Creamery. The 13 and up group received woven baskets with a candle and shirt from Bird’s Nest, a gift certificate from Lanza Gallery, and coupons from Lion’s Lair, Pink Flamingo, Steak Out, Woman’s Club spaghetti dinner, and Bambi’s Cafe. There were also awards given to Reva Huey for Refined Furniture for the business entry and a coupon for $100 in pizza was awarded to the High Springs Parks and Recreation Department for the city employees’ entry.

Joining forces by combining multiple events provided visitors a wide variety of activities and entertainment throughout a busy day. “We were very pleased with the results and efforts of everyone to make this a success,” said Chamber President Sharon Johns Decker. Everyone had fun and the vendors did well on sales. They were all asking to sign up for next year’s event already.”