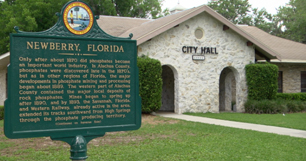 NEWBERRY ‒ Newberry residents once again came out and expressed concerns about a 258-acre proposed development under consideration by the Newberry City Commission on Oct. 24.

Citizens voiced concerns, including a request that the City require developers to hold a meeting with neighbors prior to considering a large development by the Planning and Zoning Board, overall loss of green space and traffic issues. Mayor Jordan Marlowe asked the developer to consider designing the crosswalk for golf carts as well as pedestrian traffic and that a roundabout might be considered to slow traffic in that area.

An application for a large-scale amendment to the City’s Future Land Use Plan Map was presented by JBPro Group, Inc.’s Director of Civil Engineering Chris Potts, acting as agent for property owners Jason, Mary, James, Connie, Paul, Tammy and Lewis Coleman and Austin, Emma and David Mattox. The amendment request changes the Future Land Use from Agriculture to Residential Low Density on the 258.3 +/- acres.

Potts said that the developers will provide a crosswalk across CR 337, a road which has been identified as dangerous because of curves. Alachua County has jurisdiction over CR337, and the developer must consult with the County regarding a crosswalk.

Conditions of approval included traffic calming measures, the CR 337 pedestrian crosswalk and completion of the open space prior to Phase 2 commencement.

Commissioners unanimously approved the large-scale amendment application and directed staff to transmit the application to the Florida Department of Economic Opportunity (DEO) in Tallahassee for state review. The review process usually takes 30 – 45 days.

In a related matter, the Commission approved 3-1 to rezone the same 258.3 +/- acres from Agricultural (A) and Residential (Mixed) Single-Family/Mobile Home (RSF/MH-2) to Planned Residential Development (PRD). Commissioner Tony Mazon cast the dissenting vote.

Citizen concerns expressed were that a 10-foot buffer was not adequate unless a wall was also included at the front of the property. Residents also called for sidewalks and traffic mitigation. But the issue of greatest concern was that although an environmental study of the property had been performed, one resident said there was toxaphene on the property that should be mitigated prior to construction.

According to Potts, the Department of Environmental Protection would be reviewing the application and the City will get feedback from the County if they believe the environmental study was not adequate.